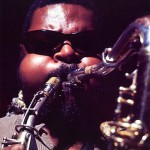 This episode begins with a paean to Rahsaan Roland Kirk. If you haven’t heard him play, don’t worry, you’ll have plenty of chances on this podcast. Kirk perfected what he called “circular breathing”—he could play three saxophones at once, plus the stritch, the manzello, and the nose flute. And just about anything else he put his hand to. The song you’ll hear is his 1971 version of “The Old Rugged Cross” and his spoken word intro to it is a thing of beauty! (Check out the youtube link to hear the entire song—it’s worth it.)

In this episode August talks about being bedeviled by love and asks a big-ass question: What or who is God? Yeah, it’s a wee bit ontological, so if you want to skip ahead to some great storytelling, check in around minute xx:xx to hear “The Way Station,” a testimony that’s straight outta the Seventies. It’s a mashup of “The Rivers of Babylon” with Tin soldiers and Nixon’s comin’/We’re finally on our own/This summer I hear the drummin’/Four dead in Ohio.

Comments have been closed.
Higher Love © 2015